What Type of Rice Is Better For Your Health?

WHICH KIND OF RICE IS BEST? HINT: IT’S NOT BROWN.

Let me start by saying that rice is not exactly health food. It’s mainly starch and isn’t really a good source of micronutrients. But, it’s something I can’t live without. Coming from an ethnic background that relies on it, meals without it just don’t feel the same. Yes, I know there are “mockups” like cauliflower rice, but c’mon it’s not the same 🙂. 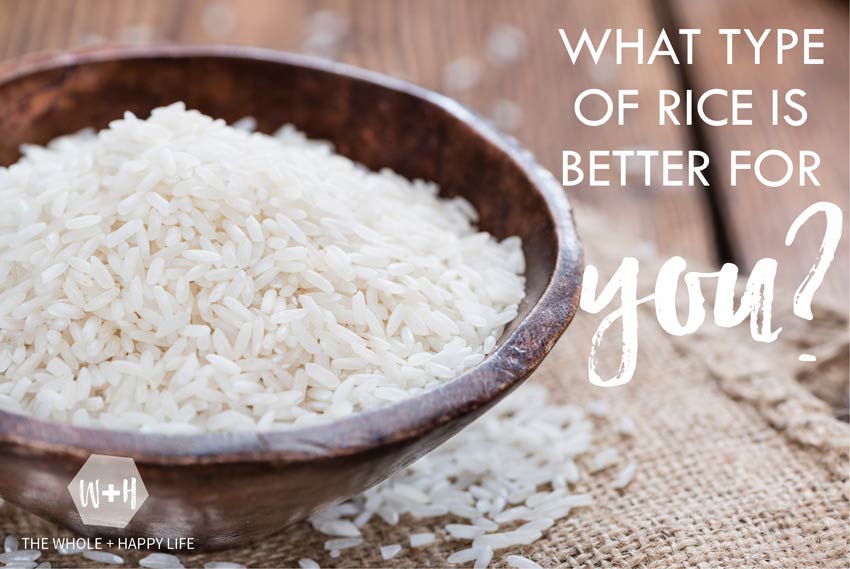 So, from time to time, I’ll indulge myself and make some rice, but in the back of my head, I know it isn’t a wise choice given my family history of diabetes. Not that rice alone causes diabetes. But there does seem to be a connection between rice and diabetes in several studies (more on that later).

Is there any rice I can enjoy just a couple times a week that won’t up my risk of diabetes? The media tells us that brown rice is the best bet health-wise, but is that really the case? Is white better than brown? Or is there some other kind I am missing out on?

So many questions! Which means it’s time to find answers.

There are many, many different kinds of rice available in the market – long-grain, short-grain, white, brown, red, purple, black – the list is endless. But for the purpose of this article, I’ll stick to the different kinds that we usually encounter at the grocery store.

Most commonly, you’ll see white, brown, parboiled and minute (instant) rice at the local stores. So let’s dive in to see what the differences are.

Regular-milled white rice, often referred to as “white” or “polished” rice is the most common form. The outer husk is removed, and the layers of bran are milled until the grain is white. You can find many different varieties such as basmati, jasmine, arborio, etc.

Brown rice is rice from which only the hull has been removed.  It has a slightly chewy texture and a nut-like flavor and has more fiber than white rice. The light brown color of the grain is caused by the presence of bran layers which are rich in minerals and vitamins, especially the B-complex group.

Parboiled rice is rice that has gone through a steam-pressure process before milling to remove the husk. This procedure gelatinizes the starch in the grain, and ensures a firmer, more separate grain. It also helps some of the nutrients from the husk to enter the grain (a good thing!). Sometimes parboiled rice is called converted rice.

This is white or brown rice that has been completely cooked and dehydrated after milling. This process reduces time required for cooking. This is NOT the same as parboiling.

There are a few things we can compare:

1. Which rice is best in terms of vitamins and minerals?

Brown rice has more nutrients than other forms of rice, but it’s not much. A 100 gram (~ 1/2 cup) serving of cooked brown rice has the following minerals [2]: 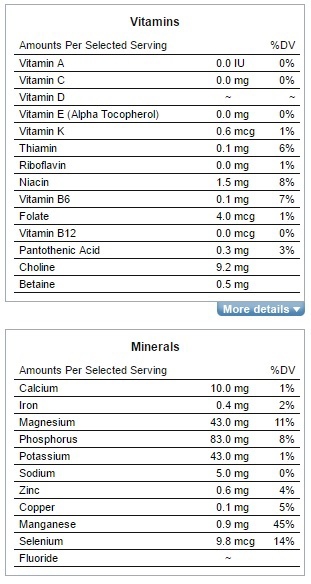 Doesn’t seem like that much, does it? Besides magnesium, manganese and selenium, one 1/2 cup serving of brown rice (a standard serving [3]) doesn’t provide you with a substantial amount of vitamins and minerals. And did you know that the minerals in brown rice might not even be bioavailable (in other words, our bodies can’t absorb them) [4]?

Parboiled rice doesn’t have as many nutrients as brown rice [5].  As for minute (instant) rice, the vitamin and mineral content will depend on whether it is brown or white. In general, after reviewing the nutrition facts of various kinds of rice, it seems that they don’t really have much to offer in terms of vitamins and minerals.

The clear winner? None. I wouldn’t rely on rice for my vitamins and minerals. It’s not a substantial source of any nutrients I can’t get from eating more fruits and vegetables.

2. Which one has the most fiber?

Out of the four categories of rice (brown, white, parboiled and minute), brown rice contains the most fiber. Well, we already knew that! But how much more exactly?

For a 1/2 cup serving (a standard serving) of cooked rice, the amount of fiber is:

The clear winner? None! The amount of fiber that brown rice provides is really not that much. I can easily get the additional 1.5 grams of fiber from eating other foods like fruits, veggies, legumes and nuts.

3. Which one has a better glycemic index/load?

Before I answer this question, we need to talk about what the glycemic index is and what glycemic load means.

The Glycemic Index (GI) is a scale that ranks carbohydrate-rich foods by how much they raise blood glucose (sugar) levels compared to a standard food. The standard food is glucose which has  GI of 100. Foods with a high GI are those which are rapidly digested and absorbed. Not a good thing! Low-GI foods, by their slow digestion and absorption, produce gradual rises in blood sugar and insulin levels.

The Glycemic Load is the most practical way to apply the Glycemic Index. and is easily calculated by multiplying a food’s Glycemic Index (as a percentage) by the number of carbohydrates (net) in a given serving. The glycemic load can be impacted by the amount of fat or fiber that is in a food, and the serving size.

Rice, in general, is known to be a medium to high glycemic food. In other words, it raises blood sugar relatively quickly. On the Harvard Health GI index [9], the different kinds of rice had the following GIs and GLs.

Instant rice looks like a nightmare – it’s almost the same as eating straight up glucose which has a GI of 100. 94 vs. 100 – not much of a difference. White rice and brown rice don’t have much of a difference in terms of GI, but they do have a different GL. Which rice is the clear winner here? Parboiled rice!

Parboiled rice has a low GI and a low GL, which means it won’t impact blood sugar levels as much. So why does parboiled have a lower GI? It all comes down to the processing. I’m normally not a fan of processed foods, but this is one time when the processing actually helps. The heating and cooling of parboiled rice during processing changes the structure of the starch molecules [12]. This results in cooked grains that is firmer and takes longer to digest – hence a lower GI value. Your blood sugar will thank you.

4. Which rice has the most arsenic?

What? Rice has arsenic? Yes it does. It’s not something to worry about unless you’re a young, growing child or if you’re an adult who consumes copious amounts of rice several times a day. But it is something worth knowing about.

Rice uptakes arsenic from the water/soil it is grown in and the amount of arsenic in different varieties grown in around the world can vary a lot. So it’s not really an easy comparison between brown, white, parboiled and minute rice. The amount of arsenic will depend on where it is grown. In general, for white and brown rice grown in the same environment, the brown option will have more arsenic. In fact, according to Consumer Reports, brown rice has 80 percent more inorganic arsenic on average than white rice of the same type [13]. Yikes!

The report from Consumer Reports also mentioned that white rice grown in Arkansas, Louisiana, Missouri, and Texas generally had higher levels of total arsenic and inorganic arsenic than rice samples from elsewhere. White basmati rice from California, India, and Pakistan on average had half of the inorganic-arsenic amount of most other types of rice [14].

If you’re trying to avoid arsenic, stick to white basmati rice from California, India or Pakistan. Whether it’s regular white, parboiled white or minute rice doesn’t seem to matter as long as it’s from the “safer” regions that have less arsenic in the water/soil.

5. What does the science say about the diabetes risk?

Most studies done on rice are epidemiological/observational studies, so even if rice is linked to diabetes or another disease, it’s hard to say it caused it. Correlation does not imply causation. So you have to take the following with a grain of salt.

I couldn’t find any scientific papers on instant/minute rice. In any case, it’s not the best choice given it’s high glycemic index.

The science supports the consumption of brown or parboiled instead of white rice, as these types may reduce the risk of diabetes.

So where does this leave us?

Simple answer? Parboiled rice is the better choice. It has a lower glycemic index and will result in lower surges in blood sugar levels. It may not have as many nutrients as brown rice, but you can’t absorb the nutrients in that anyway.

I am in no way recommending copious amounts of parboiled rice. As I said earlier, rice is not a health food, it’s more of a pleasure food. If you do have some family history of diabetes or are trying to keep your blood sugar in check, then parboiled is worth a shot for you. Make sure you’re eating fiber rich foods along with it like some sauteed vegetables or lentils, as well as good fats and proteins that can blunt the blood sugar response. And most importantly, keeping the portion size in check is important. A portion is 1/2 a cup of cooked rice, not 1 heaping cup!

Where should you get it from?

Don’t get the converted/parboiled Uncle Ben’s rice that is grown in the U.S. – that actually came up as having quite a bit of arsenic in the Consumer Reports investigation [23]! You can find parboiled basmati rice (also known as sela basmati) in South Asian stores that will have less arsenic. Just make sure it’s not from Bangladesh (they have an arsenic problem there too!) [24]. Get something from India or Pakistan instead to reduce your arsenic load.

No sweat. If you can’t find it, then white basmati (or brown if you’re not concerned about arsenic) is a good option as it has a lower glycemic index than other varieties [25]. And don’t go overboard with the rice, folks 😉 .

Hope you found this post useful. If you have any questions or comments, would love to hear from you. Leave us a comment below (scroll past the section called “other posts you might like”).

7 Benefits of Hiring a Medical Staffing Agency in 2020

Different Types of Safety Glasses with Their Unique Features

How to start hot yoga at Home for Beginners – DIY Active